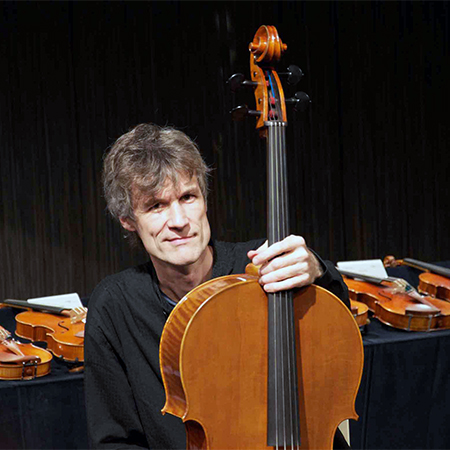 Was born in Brandenburg/Havel. He had his first music lessons at the age of four. At the age of six he began to play the cello and from 1977 he attended the specialist music school in Berlin.

In 1975 and 1982 Stephan Forck won first prize in the Bach Young Musicians’ Competition in Leipzig and second prizze in the International Instrumental Competition in Markneukirchen.

From 1983-87 he studied cello at the Academy of Music Hanns Eisler Berlin. He has perfomed with the Halle aND Neubrandenburg Philarmonic Orchestras and made radio and TV recordings.

In 1985 he was a founder member of the Vogler quartet which won first prize at the string quartet competition in Evian. Besides many tours through Europe, Asia and America, the quartet has produced a number of CDs.

In 1992 Stephan Forck became a lecturer in cello and chamber music at the Academy of Music Hanns Eisler Berlin.

In the winter semester 1999 he was appointed Professor of Cello.