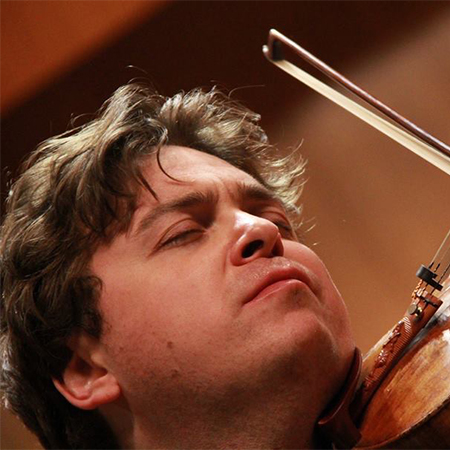 Sergey Ostrovsky has been described by Isaac Stern as “…one of the most outstanding Israeli violinists”. Sergey was born in 1975 in Russia to a family of musicians, and has built an active and successful career as the First Violinist of the Aviv Quartet, as a soloist and as First Concertmaster of Orchestre de la Suisse Romande de Genève, Orchestre Comunidad,Valenciana of Palau Des le Arts in Valencia, Spain and Violin Professor of HEM de Geneve Neuchatel branch).

Sergey began playing at the age of 6, inspired by the great talent and extraordinary musicianship of his father Valery Ostrovsky, a concert pianist and professor whose pedagogical touch and knowledge assisted him throughout his studies. as well as coaching Sergey, his father was his accompanist from 1990 – 2002. Sergey first studied with David Lapidus in the Music School for 8 years, during which time he made his first public concert appearance at the age of 8 and performed for the first time with a symphony orchestra at the age of 13.

In the Music College of Gorky Conservatory, Sergey continued his studies with Lazar Gantman and Yury Gluchovsky. In 1991 the Ostrovsky family emigrated to Israel, where he pursued his studies with Prof. Yair Kless and Irina Svetlova at the Rubin Academy Tel Aviv (from 2005-Buchmann-Mehta High School of Music). He completed his Bachelor Degree Diploma with Natalia Morozova in 2000 and his Master Degree Diploma in Amsterdam Conservatory with Alexander Kerr in 2002.

Sergey has recorded the Mozart Concertone for two violins with Maxim Vengerov and the Verbier Festival Chamber Orchestra for EMI Classics. In 2010, he recorded less known Russian concertos by Anton Arensky, Jules Conus and a world premiere recording of a Concertino op. 42 by Mieczysław Weinberg, for Naxos.

Sergey Ostrovsky teaches Chamber Music and is actively involved in conducting youth and professional orchestras. He plays a 1716 violin made by Giovanni Grancinno, purchased with the generous support of Mr. James Mayer and “Tzfonot Tarbut”, a non-profit organization for supporting arts in Israel.