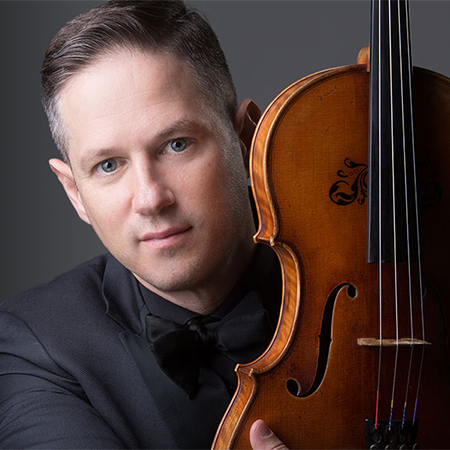 Hailed by the New York Times as “an attractive, engaging presence on stage,” violist Ori Kam has performed as soloist on some of the world’s premier stages. After his debut at the age of 16 with the Israel Philharmonic Orchestra under the baton of Zubin Mehta, he was immediately re-engaged. Since then, he has performed with virtually every orchestra in Israel, the National Symphony at the in Washington DC, the New Jersey Symphony, the Bronxville Symphony, the Manhattan Philharmonia, and Sinfonia Varsovia.

Mr. Kam is a frequent recitalist and has performed extensively throughout the US, Europe, and Israel. His recital appearance at Carnegie Hall’s Weill Recital hall received reviews such as “(Kam is) a rare viola soloist,” and “Mr. Kam’s playing (was) at once mature and youthfully exuberant.”

As an avid performer of chamber music, Mr. Kam is the violist of the Jerusalem String Quartet. He founded the Israel Chamber Music Society and was the violist of the Naumburg award winning Whitman String Quartet. Independently, he has appeared alongside artists such as Isaac Stern, Daniel Barenboim, Andras Schiff, Itzhak Perlman and Pinchas Zukerman. He has performed with the Chamber Music Society of Lincoln Center and was guest artist in numerous festivals including Verbier, Tangelwood, Aspen, Santa-Fe, Schleswig-Holstein, La Jolla, the Schubertiade, and the Jerusalem Chamber Music Festival to name a few.

Mr. Kam was born to Israeli Parents in La Jolla, CA in 1975, and grew up in Israel. He started his musical Education at the age of 6, and began playing the viola at 15. In Israel, he studied with Renowned Teacher Chaim Taub, and between 1994 and 1997, studied with Pinchas Zukerman and Patinka Kopec at the Manhattan School of Music in New York. Later, he concluded his studies with Wilfried Strehle at the University for the arts in Berlin. Between 2004 and 2006 he was a member of the Berliner Philharmoniker. Mr. Kam has been the winner of several awards and prizes including The Swiss Prize at the Geneva Int’l Music Competition, The “Pagannini” Prize in the Int’l Lionel Tertis Competition, and in ’95 was the winner of the concerto competition at the Manhattan School of Music. Last season he was awarded the S&R Washington Award grand prize. From 1990 to 2000, he has been a recipient of scholarships from the America-Israel Culture Foundation. Since 2009 he holds a professor of viola position at the University of Geneva.

In 2007, He released his first commercial recording under the “Berlin Classics” label of the Bruch Double concerto for viola and clarinet, which he recorded with his sister Sharon. A CD of the 12 Telemann Fantasies for solo viola followed in 2010 on the same label. He can also be heard on the Decca and Naxos Labels. The Jerusalem Quartet records regularly for Harmonia Mundi.