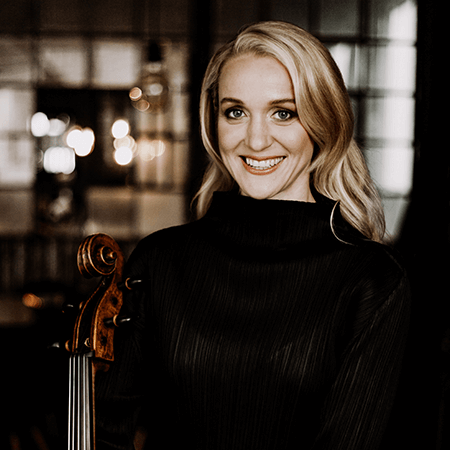 Cellist Konstanze von Gutzeit is one of the most high-profile and versatile instrumentalists of her generation.
As a soloist, chamber musician, and principal cellist of Berlin Radio Symphony Orchestra, she enjoys an active and multifaceted presence on the international stage.
Thanks to early success in numerous international competitions, Konstanze von Gutzeit made a name for herself from the very outset of her musical career.
She was prizewinner of the Grand Prix Emanuel Feuermann in 2010 and the International Prague Spring Competition in 2012. In 2013 she was awarded both first prize in the Felix Mendelssohn Bartholdy Hochschule Competition and the interdisciplinary Mendelssohn Award.

Furthermore, she won the Domenico Gabrielli Competition in Berlin, the Gradus ad Parnassum competition in Austria, the International Gianni Bergamo Classic Music Award in Switzerland, and the International Suggia Prize in Portugal. In the Deutscher Musikwettbewerb 2010, she was awarded a scholarship by the German Music Council and chosen for their Federal Selection of Concerts for Young Artists.

Born into a family of musicians, Konstanze von Gutzeit started playing the cello at the age of three.
Ten years later she began her studies with Heinrich Schiff in Vienna, and continued with Jens Peter Maintz in Berlin and Wolfgang Emanuel Schmidt in Weimar.
Further significant musical inspiration came in the form of masterclasses with David Geringas, Frans Helmerson, Gary Hoffman and Ferenc Rados.
Since 2012, Konstanze von Gutzeit has held the position of principal cellist of Berlin Radio Symphony Orchestra.

As a soloist, she performs with ensembles including Berlin Radio Symphony Orchestra, Bochumer Symphoniker, Vienna, Munich and Stuttgart Chamber Orchestra, Kammerakademie Potsdam and the Bruckner Orchestra Linz, under conductors such as Marek Janowski, Kurt Masur, Michael Sanderling, Alexander Shelley and Yuri Bashmet.
As a guest at renowned festivals such as the Schleswig-Holstein Musik Festival, Lucerne Festival, Verbier Festival and the Festspiele Mecklenburg-Vorpommern, she has given numerous recitals and chamber music concerts.

Konstanze von Gutzeit plays a Gioffredo Cappa cello from 1677, and also a new instrument by Berlin luthier Ragnar Hayn from 2017.