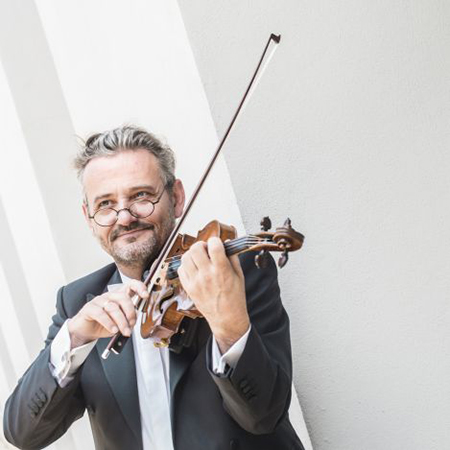 Johannes Meissl is a professor of chamber music and has been Vice Rector for International Affairs and Art since October 2019.

Prior to his appointment as vice rector, he headed the Joseph Haydn Department of Chamber Music, Early Music and Contemporary Music beginning in 2010 and also served as president of the mdw Senate from 2015 until September 2019. Furthermore, Meissl is artistic director of isa – the International Summer Academy of the mdw.

Johannes Meissl studied at mdw with Wolfgang Schneiderhan, Gerhart Hetzel, and Hatto Beyerle. 1982 saw him join the Artis Quartet (in which he continues to play). This quartet soon became a frequent guest of the world’s most important concert halls and festivals, and the numerous awards won by their approximately 40 recordings (such as the Grand Prix du Disque, Diapason d’Or, Deutscher Schallplattenpreis, Echo, etc.) as well as the successful “Artis Series” at the Musikverein in Vienna (running since 1988) bear witness to their international standing. Alongside his quartet work, Meissl also performs in solo recitals and as part of numerous international chamber music projects.

Meissl shares artistic direction of ECMA (European Chamber Music Academy) with Hatto Beyerle, and he also gives master classes at numerous renowned schools and summer academies worldwide. Furthermore, he is currently serving as a visiting professor at the Shanghai Conservatory of Music. And finally, recent years have seen Johannes Meissl achieve additional success as a conductor, as which he regularly works together with orchestras in Japan, Romania, Lithuania, Austria, and Finland.