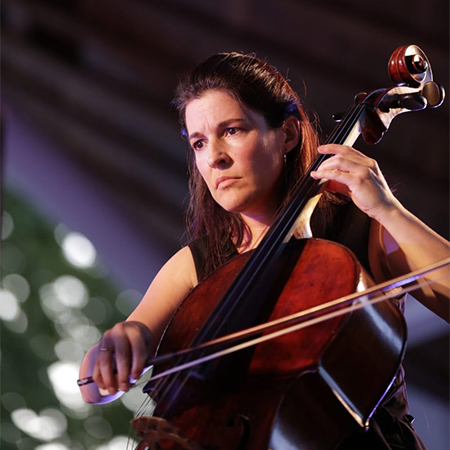 Born in Madrid, Helena Poggio studied at the Escuela Superior de Múscia Reina Sofía under the direction of Frans Helmerson. She later continued her studies in the USA at Indiana University and at the Juilliard School in New York. She has attended master classes with N.Shakovskaya, D. Geringas, B. Greenhouse, J. Starker and B. Pergamenschikov among others. Helena has been awarded prizes at various national and international competitions in Spain, Portugal and the USA and has been recorded for Spanish National Radio. As an orchestra member she has worked with conductors such as J.Levine, K.Masur, L.Maazel, Z.Metha or Sir Colin Davis in various orchestras.

Helena has always been passionate about chamber music and strongly believes it is one of the best ways to learn, develop and share music with colleagues, students and audiences. Her chamber music teachers R. Schmidt, W. Levin and H. Beyerle have profoundly influenced and shaped her way of understanding music.

As a member of the Cuarteto Quiroga since the beginning of their studies, she has won prizes at several of the most prestigious intenational competitions for String Quartet as well as the Spanish Radio Culture Prize “Ojo Crítico”. The Cuarteto Quiroga tours regularly across Europe, the USA and South America and has released four CD titles (Cobra Records, Harmonia Mundi) with unanimous applause from critics and audiences. It is considered one of the most dynamic, bold and important quartets of Europe’s newest generation.

Fulbright scholar Helena enjoys teaching chamber music as much as performing with the Cuarteto Quiroga. She currently has a post at the Conservatorio Superior de Música de Aragón and at the International Summer Course of Llanes (Asturias). She has been a jury member of the Bordeaux Intenational String Quartet Competition as well as the spanish “Juventudes Musicales” Competition.