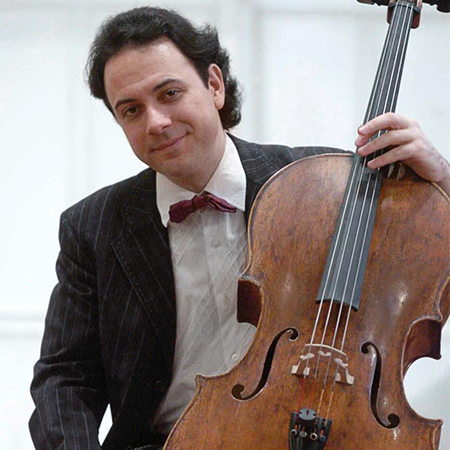 Emil Rovner was born in 1975 in Gorki (now Nizhny Novgorod), Russia. While only ten years old, he debuted as Soloist with the Gorki Philharmonic Orchestra. He studied Cello with Anatoly Lukianenko in Gorky, Ivan Monighetti in Madrid (Escuela Reina Sofia) and Basel (Musikakademie) and with Boris Pergamenschikow in Berlin (HfM Hanns Eisler). He also studied Conducting with M. Samorukova and Singing with U. Messthaler (Schola Cantorum Basiliensis).

Emil Rovner received numerous prizes at international cello competitions, including the First Prize at the J. Brahms Competition in Austria, the First Prize at the Jost Competition in Lausanne (Patronat Lord Menuhin) as well as the First Prize and the Gewandhaus Prize at the J. S. Bach Competition in Leipzig. Upon recommendation by Vladimir Ashkenazy, he debuted as soloist with the Tonhalle Orchestra Zurich under Gary Bertini. Recently he appeared as soloist with such orchestras as the St. Petersburg Philharmonic, the Münchner Kammerorchester, the Berlin Symphony Orchestra, the Kammerorchester Basel, the Camerata Bern, The Chech Chamber Philharmonic, tue Moscow Symphony and the Kammerakademie Potsdam a.o. He performed in concert halls such as the Grand Hall of the Berlin Philharmony, the Gewandhaus Leipzig, the Beethovenhaus Bonn, the Queen Elizabeth Hall London, the St. Petersburg Philharmonic Hall, and the Tonhalle Zürich. He was invited to participate as Cellist, Singer and Conductor at Festivals such as the Lucerne Festival, the Berliner Festwochen, the Bachfest Leipzig, the Schleswig-Holstein Festival as well as Gidon Kremer’s “les muséiques” and the “Viva Cello” in Basel. He maintains close artistic contacts with contemporary composers such as Holliger, Silvestrov, Firsova, Ali-Sade, Norgard, Mansurian and Knaifel. The Russian-Canadian Composer Evgeny Shcherbakov wrote a “Concerto for Cello and Voice in one Person” and dedicated it to Emil Rovner.

Emil Rovner is co-founder and Artistic Director of the Festival “RESONANZEN” in St. Moritz and of the “Mieczyslaw Weinberg Festival” in Dresden. He gives frequent masterclasses for cello in Switzerland, Italy, Portugal and Russia, and he is a jury member at international cello competitions.

In 2007 Emil Rovner was appointed Professor and Head of the Cello Departement at the “Hochschule für Musik C.M. von Weber” in Dresden, Germany.

His debut CD on Label DIVOX with Works for Cello Solo by Mieczyslaw Weinberg was awarded with 5 stars in “Fono Forum”.