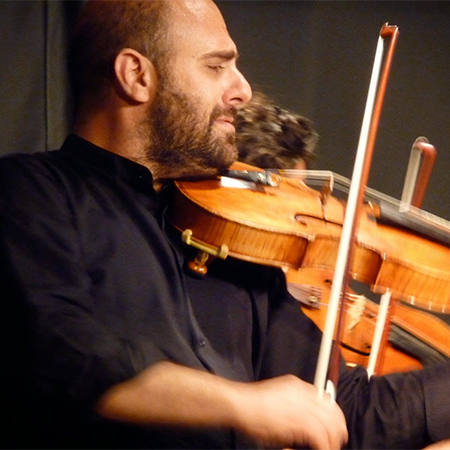 Avri Levitan is an internationally acclaimed violist and the director and co-founder of Musethica. Levitan grew up in Israel, where he studied in the Rubin Academy of Music in Tel-Aviv and later in the Conservatoire de Paris-Cycle de Perfectionnement. Avri Levitan has established himself as a sought-after soloist, chamber musician and educator performing regularly on many of the most important world stages. He was nominated for the BBC Music Magazine Awards and the Royal Philharmonic Society Music Awards

Levitan performed on stages like the Vienna Konzerthaus (Austria), Berlin Philharmonie (Germany), Madrid National Auditorio (Spain), Tokio Oji Hall (Japan), Seoul Art Center (South Korea), Beijing Forbidden City Concert Hall (China), Tel Aviv National Philharmonic (Israel), Schlezwig Holstein Music Festival (Germany), Festspiele Mecklenburg-Vorpommern (Germany), Prades Festival (France) and many more.
Avri Levitan is dedicating a large part of his musical life to educating musicians, as a professor for viola and chamber music (CSMA Zaragoza, Spain) and as a guest teacher in many institutes such as the Royal Academy of Music in London, the University of Music and Performing Arts in Vienna, the Central Conservatory of Music and Middle School in Beijing (China), and many more institutes in Europe and Asia.

In 2012 Avri Levitan co-founded the educational method and concept Musethica. He is directing all the musical activities in the eight countries where Musethica currently is active.