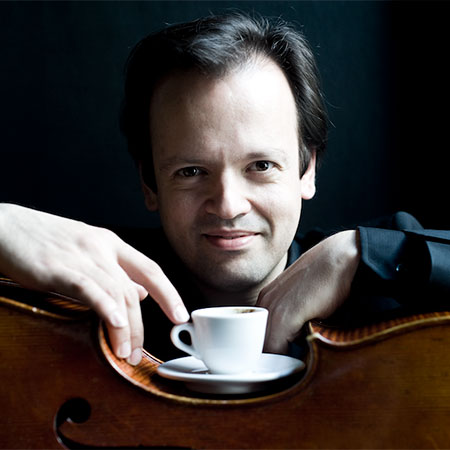 Alexander Gebert was born in 1977 in Warsaw to a family of musicians who emigrated to Finland in 1980. At the age of five he began his cello studies in Timo Hanhinen’s class at the Turku Conservatory. In 1989 he was admitted to the Sibelius Academy in Helsinki, where his teachers were Csaba Szilvay, Victoria Yaglig, Kazimierz Michalik, Marko Ylönen and Heikki Rautasalo. Between 1995 and 1998 he studied with Kazimierz Michalik at the Warsaw Chopin Academy as a scholarship holder of the Polish State. He then continued his studies with Philippe Muller at the Conservatoire de Paris and as a DAAD scholarship holder at the Stuttgart Musikhochschule with Natalia Gutman. In 2002 he was awarded a three-year scholarship by the Groupe Banques Populaires in Paris. Alexander Gebert won his first international cello competition at the age of sixteen; in 1997 he came second in the Warsaw Lutoslawski Competition, and in 2000 he won the 3rd prize of the Antonio Janigro Competition in Zagreb, the 2nd prize and the Audience Prize of the International Competition in Geneva, and finally the 1st prize in the Concorso Valentino Bucchi in Rome.

Alexander Gebert has performed in Europe and North America as a soloist and chamber musician at a number of renowned music festivals (including Kuhmo Festival, Oleg Kagan Music Festival, Lockenhaus Chamber Music Festival, Festival de Deauville, Ravinia Festival, West Cork Music, Beethoven Easter Festival Warsaw). Particularly important to him were encounters and collaborations with numerous composers of our time, such as Mauricio Kagel, Salvatore Sciarrino, Friedrich Cerha, Krzysztof Meyer, Krzysztof Penderecki, Albert Schneltzer and Kurt Schwertsik. In the years 2005-2012 Alexander Gebert was cellist of the Altenberg Trio Vienna. In more than 1000 appearances, the trio had earned a reputation as one of the most daring and consistent ensembles in this category: its repertoire comprises – in addition to a large number of works from the immediately adjoining fields (piano quartets and piano quintets, duos, triple concertos, vocal chamber music) – no less than 200 piano trios, including a number of works which the Altenberg Trio itself inspired and premiered.

At the same time as it was founded, the Ensemble Trio became the in residence of the Gesellschaft der Musikfreunde in Vienna, for which it performs an annual concert cycle in the Brahms Hall. In the years 2007-2011 Alexander Gebert gave two recitals a year at the Musikverein Vienna, with a series of premieres of commissioned works by composers such as Richard Dünser (“Garden of Desires”, Ed. Peters), Tomasz Skweres (“Hesitation” Ed. Doblinger), Lukas Haselböck, Akos Banlaky, Helmut Schmidinger and Christoph Renhart. Alexander Gebert regularly gives master classes in Finland, Belgium, Austria and Poland. He has taught chamber music at the Konservatorium Wien Privatuniversität, Accademia the Musica di Pinerolo and the Accademia pianistica di Imola, has been a guest professor at the Karol Szymanowski Music Academy in Katowice, and has given master classes at music academies, universities and festivals in Finland, Poland, Russia, Holland, Italy, Albania, Denmark, Mexico, New Zealand, Korea, Hong Kong and the USA. In 2010 he was appointed professor at the Hochschule für Musik in Detmold, where he has also been artistic vice rector since 2015.