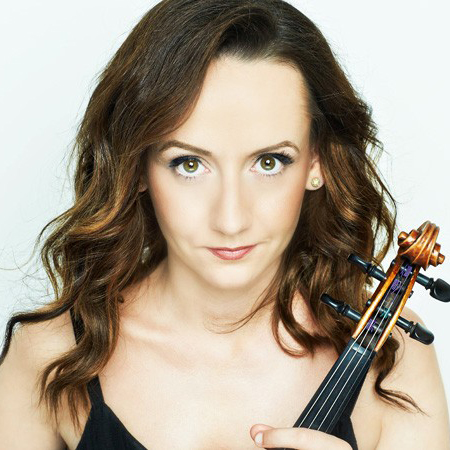 Winner of the 2006 Henryk Wieniawski International Violin Competition in Poznań, Agata Szymczewska was awarded the Prize of the Audience and most special prizes, including major orchestra and recital engagements.

She also received the London Music Masters Award given for the first time by a committee composed of members of the London Philharmonic Orchestra, Wigmore Hall and the Royal College of Music. In October 2009 Agata had her debut at Wigmore Hall, following which she received an invitation to play at the Royal Festival Hall with the London Philharmonic Orchestra conducted by Osmo Vanska in autumn 2010.

She graduated from the Academy of Music in Poznań, and since 2004 has studied with Professor Krzysztof Wegrzyn at the Hochschule für Musik und Theater in Hannover, at the moment at postgraduate level. Since October 2010 Agata is a faculty member of the Music Academy in Poznań.

Besides these, Agata is a very active chamber musician. Every year since 2005, she has taken part in the prestigious International Music Academy Switzerland founded by Maestro Seiji Ozawa. In 2005, she toured Japan and China with Maestro Seiji Ozawa as the youngest member and concertmaster of Ongaku-juku Orchestra. In 2010 she took part in the Kronberg Academy’s „Chamber Music Connects the World” Festival, where she had the chance to play with Gidon Kremer, Yuri Bashmet and Franz Helmerson.

Agata has received scholarships granted by the Polish Fund for Talented Children, the Polish Prime Minister, Yehudi Menuhin Live Music Now, Gundlach Musikprize and the Polish Ministry of Culture as part of the program “Young Poland”. In 2006 she was honoured with such awards as: Passport of the „Polityka” weekly, TVP Kultura Award (in the category of classical music) and Fryderyk Award (for the best solo album of the year). Her recording of Karlowicz’s violin concerto (with Sinfonia Varsovia conducted by Jerzy Maksymiuk) was also awarded with a Fryderyk Award in the category “symphonic and concert music” in 2008.

In February 2009, together with Krystian Zimerman, Kaja Danczowska, Ryszard Groblewski and Rafał Kwiatkowski, she performed Grażyna Bacewicz’s Piano Quintets to commemorate the centenary of the composer’s birth. The tour ended with recording a CD for Deutsche Grammophon.

In October 2010 appeared Agata’s new CD with violin concertos of Bruch and Mendelssohn and Wieniawski’s Legend.